I was born in Scarborough, under the name Wesley Nisbet. My mother and father separated when I was very young, too young to even remember. I was raised as Wesley Jackson and after I turned 18, I had my name legally changed to Jackson.

I grew up with two older brothers, and I have an older sister, who wasn’t part of my life until I was 16 or so. I don’t use the terminology “half-brother” or “half-sister” although a stickler would tell you that’s technically true (sticklers can stickler it up their stickly-buns). My mother raised her three boys on her own. She worked at Canada Post in the mid-80’s, but when she left that job, she tried her hand at various careers including Real Estate until she got her hair-dresser’s licence. I inherited my osteo-arthritis from her, and she is medically retired at this point. But free hair cuts, am I right?

We moved around a lot when I was young, but we finally settled in Heart Lake in the spring of 1983. We moved into Mondragon Co-op, and there we stayed until I finished school.  I attended Somerset Public School for grades 3 to 5, then went to the newly built (as it was at the time) R.H. Lagerquist for three years. 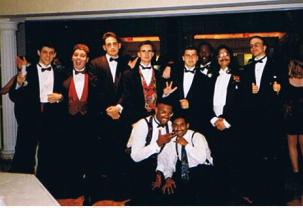 After that, I attended a regional program at J.A. Turner S.S. (which became Turner Fenton while I was there), and graduated in ’94. Please enjoy a picture from my Prom!

My first job was delivering the Daily Times around Elmvale Avenue (Pontiac, Kindle and Maraboo Courts, of course).  In grade 9, I briefly washed dishes at Teresa’s (at Main and Bovaird) before I got a job at the Pizzaville in the Heart Lake Town Centre. Over the course of four years, worked my way up from answering the phones, to making pizzas, to delivering pizzas.

After High School, I went to the University of Waterloo, in a general arts economics program. It was at Waterloo that I learned to play squash, got into weight lifting (before I dislocated my knee in an unrelated incident), and found myself sitting for a semester on the INDSA Executive. About two and half years into my program, my interest had started to wane. I did very poorly in a number of my classes, entirely due to lack of effort and abysmal attendance.  I realized that until I figured out why I was going, I shouldn’t bother.  Just going through the motions was doing more harm than good. So I dropped out of university to go find myself.

I took a little over a year off, working a mix of full time jobs and doing temp agency work, before I figured out that I wanted to go to Law School. With that focus now a part of my life plan, I finished up my undergrad degree by taking night courses on campus from Monday to Wednesday,  and working full time hours every weekend here in Brampton. It was during this period that I would ride the VIA train back and forth from Kitchener to make it everywhere I needed to go. I stayed focus, wrote my LSAT’s, finished my degree and was accepted into Law School at Western University.

In the fall of 1999, I moved to London, Ontario. It was a culture shock for me. There was a noticeable lack of diversity as compared to Brampton, and the fact that I had to work part time to make ends meet was a bit of an oddity in that environment. But work I did, and I graduated in 2002. In the years I lived in London, I didn’t have a car or a bike, and would walk or take transit everywhere.

I moved on to finish up my articles at a criminal defence firm in Kitchener. My time was split between the office in Belmont Village and the courthouse on the east end of Kitchener’s downtown area.  I was living in Bramalea and commuted to Kitchener everyday for over ten months. I would take turns between getting there on the 401, or taking highway 9 through Erin, which funny enough, only actually added about 15 minutes to the trip. Oh, I also got married that year. 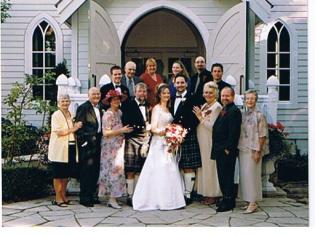 My father, James Nisbet, passed away not long after we got married. He had a series of strokes that left him incapacitated. His end of life experience still informs the discussions I have with my clients about planning their Wills and Power of Attorney forms.

My wife and I were living in Bramalea near the City Centre. I finished my articles, and was called to the bar in 2003.

I got a job at Rutman & Rutman PC, and we bought our first house on Centre Street, near Queen, and soon enough we adopted two dogs named Rudy and Gucci. Time moved on, and we started thinking about a family.  In 2008, we experienced a life changing loss: our first daughter was diagnosed with Hypoplastic Left Heart Syndrome. In our case, it was a fatal heart defect and she passed away a few hours after her birth.

In 2009, I left my job to start up Wesley Jackson Professional Corporation (WJPC), where I have been ever since. WJPC began in rented space in the Brampton Business Executive Suites on George Street, then grew into its own space at 60 Queen Street East. I joined the Brampton Board of Trade, and took part in one of its Early Morning Trade Show groups, a bi-weekly networking group. Through the Board of Trade and a “by referral” approach, I grew my business and have helped hundreds of people with buying or selling their homes, refinancing their mortgages, dealing with estate matters, and at times, responding to criminal charges or civil litigation cases.

In 2013, I made the decision to move out of the Downtown into our current space on Rutherford Road South. I value the time we spent with our offices in Downtown Brampton, as it taught me a lot about Brampton, Four Corners, and about the dynamics of our customers’ relationship with our Downtown.

We lived on Centre Street for over a decade, until our son came along and we officially outgrew the house. Now, we have a place in Peel Village and myself, my wife, and our two lovely children are enjoying living on a quiet street, where cars and trucks aren’t speeding by at dangerous speeds at all hours.

I don’t play squash anymore; I have osteo-arthritis in both of my knees. I spent a few years learning to run; I finished my first 5K in Sept 2013 and my first (and only) Half Marathon in March of 2015. I also completed some “Try a Tri” distance triathlons in that time. Sadly, I had an adverse reaction to an injection in one of my knees in 2016, and haven’t run since.  But, I have kept cycling. For the past four years, I have taken part in the Enbridge Ride to Conquer Cancer and the Ride for Heart in Toronto (to honour my father and daughter). I can’t swing a golf club to save my life, in case you were wondering.

With an undergraduate degree in economics and a law degree, one could argue I’ve always been preparing to go into politics. But it’s not true.  Law is a profession that is always evolving and I will always be happy to be part of it. But I have always felt the need to give back. Since graduating, I have volunteered time or donated money to a variety of causes, including the Kiwanis Club of Brampton, Celebrity Clowns, Buddys ‘N Bows, Sick Kids Hospital, Lung Association, Princess Margaret Cancer Foundation, and the Heart and Stroke Foundation.

In 2022 – it’s time for change. And Wesley Jackson will bring the grit, determination, and vision to make it happen.